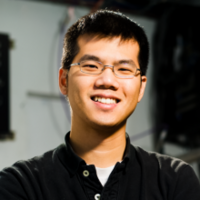 The vast design space and long lifetime of batteries have limited the speed of innovations at the materials, cell, and systems level. In this talk, Professor Chueh will overview efforts at Stanford to dramatically accelerate the pace of research and development for lithium-ion batteries by hybridizing physics-based and data-driven approaches.

Will Chueh is an Associate Professor in the Department of Materials Science and Engineering, a Senior Fellow of the Precourt Institute for Energy at Stanford University, and a faculty scientist at SLAC National Accelerator Laboratory. He leads a group of more than thirty researchers tackling the challenge of decarbonizing various energy transformation pathways, and co-directs Stanford's StorageX Initiative that builds academic-industrial partnerships to accelerate the electrification of transportation and the penetration of intermittent renewable electricity in energy systems. In 2021, he co-founded Mitra Chem to accelerate lab-to-fab for advanced material materials. He received his BS in applied physics, and his MS and PhD in materials science from Caltech. Prior to joining Stanford in 2012, he was a Distinguished Truman Fellow at Sandia National Laboratories. Chueh has received numerous honors, including the Humboldt’s Bessel Award (2021), MRS Outstanding Young Investigator Award (2018), Volkswagen/BASF Science Award Electrochemistry (2016), Camille Dreyfus Teacher-Scholar Award (2016), Sloan Research Fellowship (2016), NSF CAREER Award (2015), Solid State Ionics Young Scientist Award (2013), Caltech Demetriades-Tsafka-Kokkalis Prize in Energy (2012), and the American Ceramics Society Diamond Award (2008). In 2012, he was named as one of the “Top 35 Innovators Under the Age of 35” by MIT’s Technology Review.