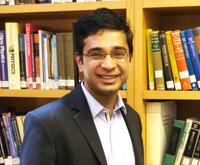 “Quantum sensor” technologies have opened attractive new applications stemming from the ir sensitive detection of magnetic fields. This is typified by the Nitrogen Vacancy (NV) center in diamond that has allowed the nanoscale sensing of spins in materials, molecules, and biological systems through optical means. In this talk, Professor Ashok Ajoy will describe a complementary modality of how such quantum sensors could assist in the injection of spin polarization into surrounding nuclei, “hyperpolarizing” them into athermal spin states that are far from equilibrium and allowing their magnetic resonance signatures to be enhanced by several orders of magnitude[1-2].

Prof. Ashok Ajoy received his B.E./M.S. from BITS-Pilani, India in 2010 and his Ph.D. under Prof. Paola Cappellaro at MIT in 2016. His graduate research, which MIT recognized with the Manson Benedict award (2014) and the Del Favero thesis prize (2017),  focused on nanoscale MRI using quantum sensors, with applications to NMR chemical probes at high resolution.

In 2017, Ashok joined Prof. Alexander Pines’ group in the Department of Chemistry at UC Berkeley as a postdoctoral researcher where he worked on new methods for laser-assisted spin hyperpolarization for signal enhancement in NMR.

He is now an assistant professor in the UC Berkeley Department of Chemistry. His research group is currently investigating:

In this work, his group combined magnetic resonance imaging with optical imaging in diamond microparticles, which enabled them to remove background signals and generate clear images. Their approach relies on the nitrogen vacancy (NV) center-driven optical nuclear hyperpolarizability in diamond particles, that renders them “bright” in MRI while simultaneously fluorescing optically.